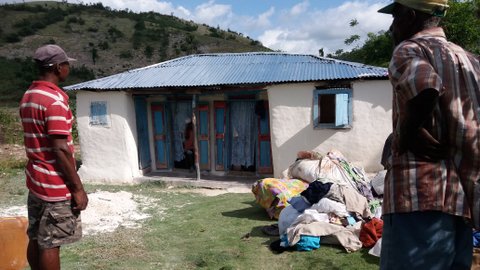 Haiti – People from mountain villages in the Maniche area (southern Haiti) are already sleeping in sheltered houses. They were able to build 38 roofs thanks to Czech donors who contributed to the collection in support of Haiti after Hurricane Matthew. From October to December, donors contributed 1,609,156 crowns to the collection announced by the Archdiocesan Charity Olomouc. Their money helps Haiti in the south and northwest.

Palm trees broken like matches, most dwellings without roofs, some without walls. Such a picture was seen by humanitarian workers of the Archdiocesan Charity Olomouc after arriving in Haiti, where in October 2016 a 4th degree hurricane was raging. They planned a project on the spot to renovate the shelter and schools. “We visited the Haitians, who were left with only one room from the house, and some of them were hit by the hurricane, so they stretched plastic on the remaining walls. Most of them lost their belongings and their source of livelihood. The wind destroyed crops as well as equipment such as boats and nets for fishermen. In such a situation, it is difficult to bounce off the bottom. That is why we decided to help people with the restoration of their facilities, ie the construction of a roof, “says humanitarian worker Klára Lőffelmannová. The Archdiocesan Charity Olomouc has experience in Haiti in securing sheet metal roofs that can withstand rain and larger winds. Her new project will now help more than the 700 Haitians affected by the hurricane.

Maniche – the transport of material was hampered by difficult terrain
For example, 38 houses are already newly roofed in two villages in the mountainous region of Maniche in the south of the country. The Haitians built the roofs themselves. The situation on the spot is monitored by Renee Quadros from the Order of St. Josefa, partner of the Archdiocesan Charity Olomouc. “In the villages of Madanm Maren and Kay Gra, the hurricane carried away a lot of roofs, demolished the walls of some houses and destroyed crops in the fields. The local people were very happy for their help from the Czech Republic and started building thirty roofs. The work of the other eight houses took a little longer, which was because large families with a lot of small children live there, ”describes Renee Quadros. It was difficult to provide material (sheets, wood and nails) for a village cut off in the mountains. The vehicle got stuck in difficult terrain during transport, so the nurse had to arrange for a small tractor to come to rescue them. All 38 roofs are now ready.

The money from the collection also helped in the northwest of the country. They managed to get new school supplies for the school in Baie de Henne, which was plagued by heavy rains after the hurricane. “The village was flooded twice. Before the water receded, the school served as a refuge for affected families. However, the floods destroyed textbooks, exercise books, uniforms, stationery, rulers and many other things. We have already succeeded in renewing this equipment and the children are continuing their studies, “says Klára Lőffelmannová, adding that there are 220 children among the schoolchildren who are studying at a distance thanks to the Caritas Adoption project.

The roof of the rectory in Roche and Bateau is also repaired. Other contributions will go to this area in the south of the country, to repair the school building, which lost its roof, some walls and also equipment. With other schoolchildren, there are 19 children from adoption. Additional money will pay for the construction of the roof of the church. However, further requests for assistance from Haiti are sent to the address of the Archdiocesan Charity Olomouc.

We thank the donors for their generosity. Thanks to them, many Haitians once again have their homes, schools and other facilities.

We will help Haiti waiting for pacification

The desperate situation in Haiti makes our assistance difficult and complicated

Crisis: Failure of the official return to school in Haiti