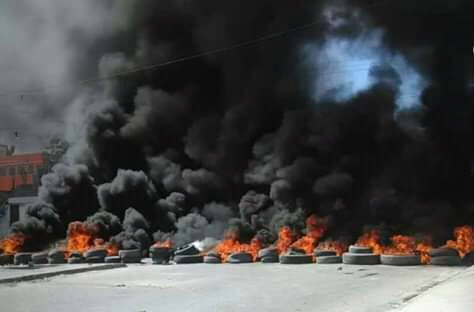 The crisis in Haiti is deepening. They closed school in Gonaïves

Haiti – The crisis in Haiti continues, slowing down even those few services, that worked in the country before. Citizens are trying to change the system and overcome corrupted politicians, but unfortunately some of them choose violence as their tool. People lose their homes, have nothing to eat, and children cannot go to school.

In Haiti, a new opposition political structure, the “Democratic Bloc for National Recovery”, was created, in which small political parties participate. They propose the immediate resignation of President Jovenel Moïse, a government with fewer ministers without a prime minister, and also that Haiti will be ruled by a chairman of the Court of Cassation. European Commission Vice-President Federica Maria Mogherini expressed deep sympathy for the people of Haiti. The European Union is committed to supporting the Haitian people on its path to stability, development and democracy, including the rule of law, and will work closely with its international partners to end this unfortunate situation.

New gangs of armed people are emerging among civilians. Some of them attacked using the Molotov cocktail a minibus full of passengers. Some suffered by burns and had to go to the hospital immediately.

People are trying to flee the country illegally. Most into the Dominican Republic. But the government of neighbouring Bahamas reports 227 attempts to illegally migrate Haitians, including 105 only in the past week. All these Haitians had to be deported back to their homeland. For example, the Bahamian Defence Force saw a crowded ship with 58 people aboard, including 52 men and 6 women.

An agreement between the opposition and civil society groups took place on Saturday 9th November. After several turbulent discussions, a judge of the Court of Cassation will be elected to replace president Jovel Moïse, whose resignation has been demanded by people for more than two months.

It is also dangerous in Gonaïves

Our partner schools were only affected by the crisis in the city of Gonaïves, where the school is completely closed and teaching is not taking place. “It is not yet clear when pupils will be able to go back to school, because the school surroundings do not seem to be safe enough. It is therefore uncertain, how it will be at the end of December with the final tests and school reports for the current quarter. We are in regular contact with the headmistress, from whom we hope to get soon some positive news,” says Lada Matyášová, Project Coordinator at Haiti.

The countryside is quiet. They repaired the school in Baie de Henne

Schools are open in Baie-de-Henne and Roche-a-Bateau. For them, the crisis of big cities is too far away. The course is taught normally.

“The Baie de Henne even managed to complete the repair of the exterior wall and stairs. Father Bertrand and the adopted children thank very much for those, who have helped, and send prayers for all people of good will in the Czech Republic,” says Lada Matyášová.

Linda Tranová, an ACHO intern, a student of  VOŠs Caritas

Haiti is more peaceful. The children have seen school and baby Jesus

The exhibition of photographs and handicrafts will take you to Haiti